The culture of DHA (docosahexaenoic acid)-rich thraustochytrids, a common microheterotroph that is taxonomically aligned with heterokont algae, is seen as one alternative source of polyunsaturated fatty acids (PUFA) since there is a decline of fish stock that cannot sustain conventional PUFA extraction. Fatty acid compositions and lipid components of Schizochytrium sp. POL01 were studied. Lipid class composition and distribution of fatty acids of Schizochytrium sp. POL01 harvested were studied, with special emphasis on the distribution of docosahexaenoic acid (C22:6 n - 3, DHA). The isolate obtained 4.8 g/L of oven - dried cells in 100 - mL medium after 72 hours of incubation. Lipid components were collected into several fractions. Fraction two and three were among the highest in percent proportion and content in DHA content according to gas chromatographic analysis. Fraction two, composed of neutral lipids, has the highest in DHA content and accounted for 47.6% of the total fatty acids which is 16.1 mg DHA/g of dried cell. Neutral lipids were the major lipid constituents in which triacylglyerol (TAG) was the predominant component. Fraction three, composed of glycolipids, mono-and diglyceride, also indicate significant value of DHA, 35.4%, 7.5 mg DHA/g dried cell, followed by fraction four of phospholipids and polar lipids, 25.1%, 1.8 mg DHA/g dried cell as DHA yield, respectively. However, the DHA content of fraction one of n-alkanes, n-alkenes and free fatty acids had the least amount with a value of 3.3%, 1.1 mg DHA/g dried cell. DHA was found to be distributed in all lipid fractions and to be the major polyunsaturated fatty acid. 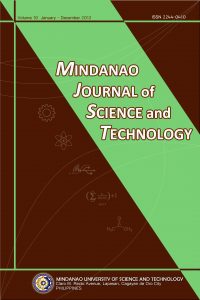